Dead Men’s Spex – look out for us online!

Did you get to see the Small Axe film ‘Mango’ last Sunday? We did and were looking out for our glasses which we spotted, Aunt Betty (Llewella Gideon ) the cook in the Mangrove was wearing a pair of ours and so was Ian Macdonald (Jack Lowden) the defence lawyer for some of the mango nine.  Mango is a shocking story about racism in London; well acted, beautifully shot and full of period detail.

Aunt Betty is at the front, second from the left in the blue dress. 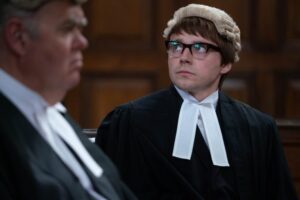 We watched the next film in the series last night named ‘Lovers Rock’ this was set a bit later in London and focussed on the lighter side of life, showing young black people enjoying them selves to  a genre of Reggae music called Lovers’ Rock. This was set around 1979 or so and again was incredibly atmospheric. The story telling in this series is very sensual and in the moment; it really draws you in. We are looking forward to next week’s episode; Red White and Blue, another true story, this is about a young black man who joins the British police force.

This week at Dead Men’s Towers we have been trundling along in lockdown two. We finally got a break in the weather and I managed to paint one of Dead Man’s workshops, AKA sheds. Any of you who have been here will  know he has a whole flotilla of them!  I also managed to paint my arm, both my hands, some of the gravel and my gardening/ painting coat  as I fell in the pot at the end of the day when I trying to close it up. Full of grace, that’s me. Luckily for me, Dead Man did not witness this debacle as he would have fallen over laughing, no doubt!

One of the things we have missed this year are the shows; every September we usually go to a large 1940s event hosted by the North Norfolk Railway –  The Poppy Line, it is hugely popular and luckily for us it is just up the road in Holt. In 2019 we went to the Festival of Vintage in York and had a great time, so were disappointed that the shows couldn’t run this year.

However, all was not lost, as thanks to people’s adaptability and the internet, we can still display our specs. Keely who runs the Festival of Vintage has set up an online vintage market place  Discover Vintage Market Place and Dead Men’s Spex has a virtual stall.

We are also attending an online show soon – The Virtual Vintage Lovers Fair which is hosted by Little Vintage Lover Affair on Sunday 6th December  10am- 3pm UTC. We will be Instagramming some photos of our stock soon for this event.

We hope you have as good a week as possible

All the best Team Dead Man